The urban planning in which the Saint-Paul’s media center is included strongly answers to the desire of expressing a new centrality for the city. In this context, the public facility that we designed marks territory by its shape, its readability, from the Tamarins road to the great landscape. The completion of a media center downtown allows the structuration of the “gateway” area. 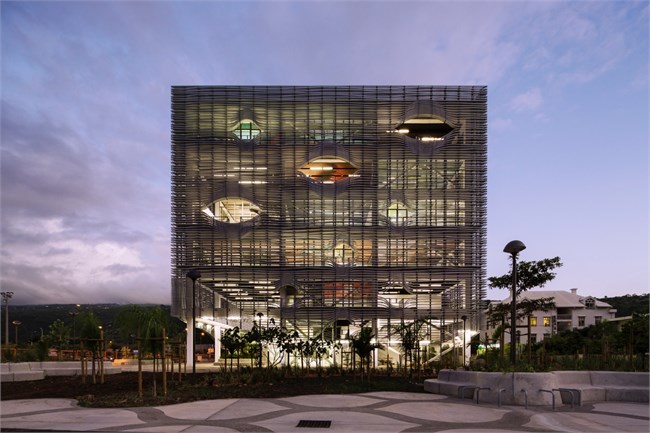 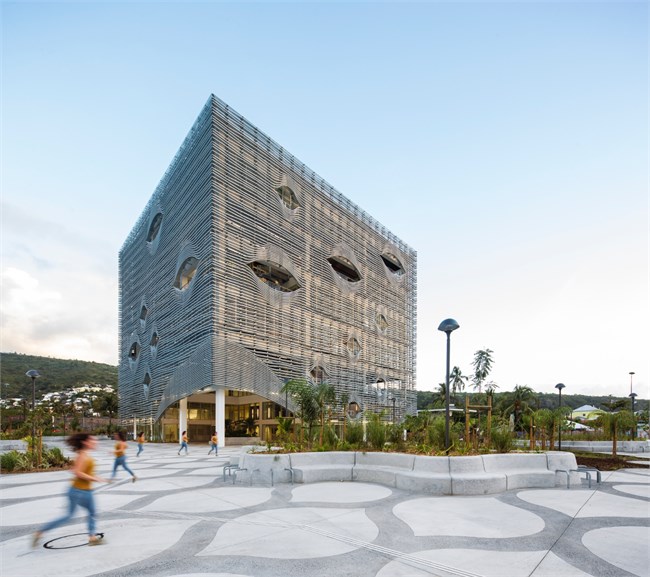 It expresses an urban renewal expected for this district which until now was considered on the fringe of the city. 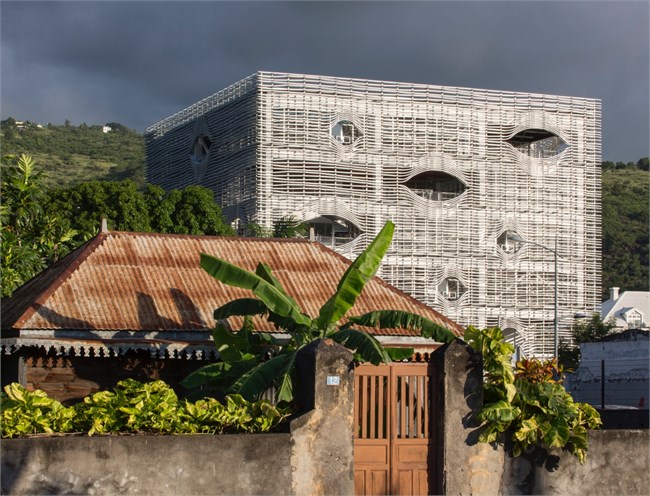 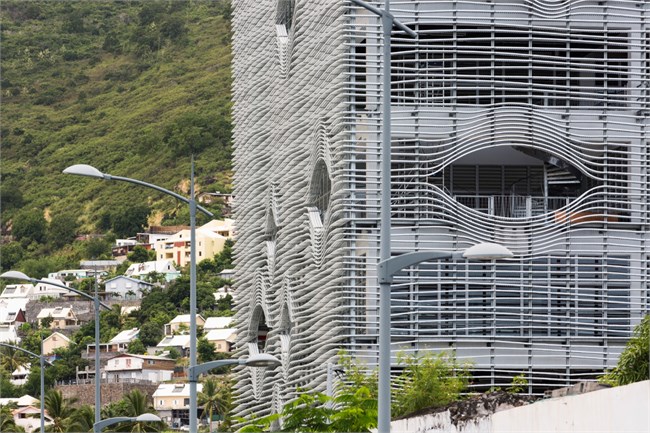 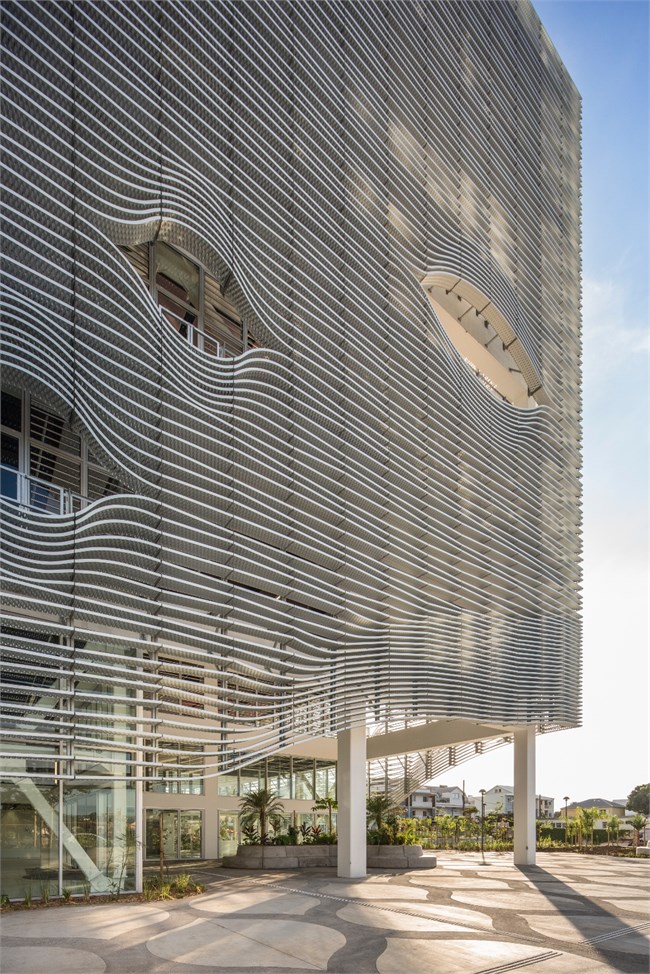 The urban settlement of this public facility answers to the need of a strong identity for this public facility in the island. This media center has to become a cultural landmark, through information and training, as well as a visual one through its architecture. Building a public construction, over its function, is to settle a construction in a context. Here in Saint-Paul, even if its richness is at the extension from the mountain climax to the seaside, the district also has to be enhanced. The Saint-Paul’s media center unfolds on six levels to take advantage of this quality, enjoying the scenery. It expresses the entrance of the city by a strong urban an architectural act. 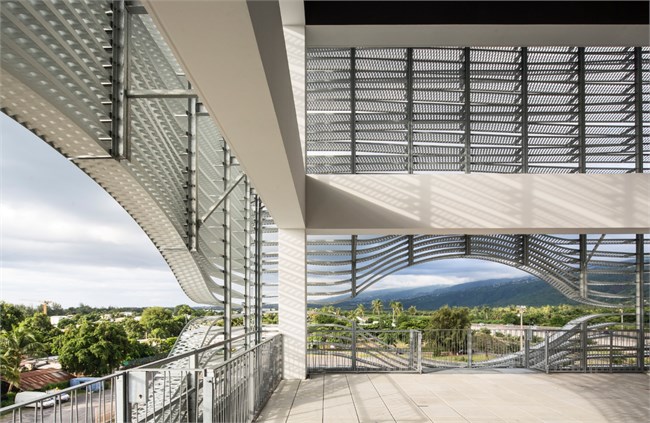 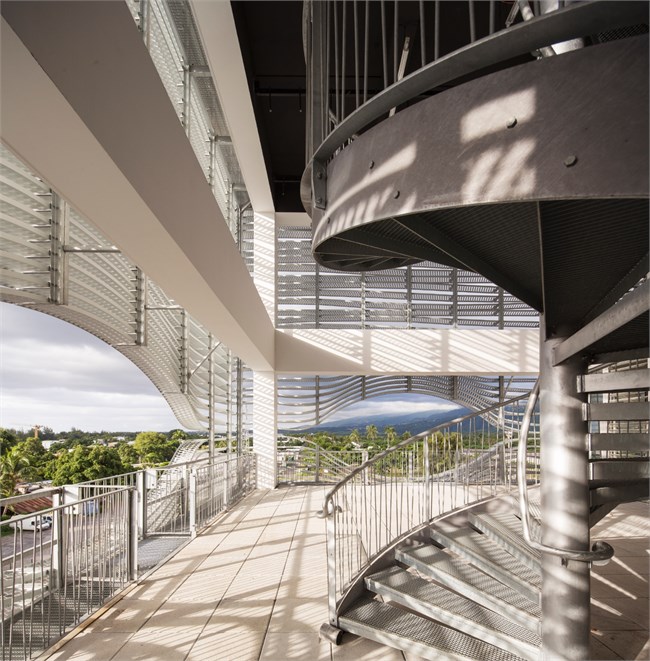 We designed a 34m side cube that includes a dense project. Its facades are inspired by the pledge of contents, represented in classic and modern medias: books with those trimmed or in folio pages, magazines or disks stack, sedimentation of maps, pile of pictures, stratification of an hard drive layers. All these accumulations that keeps the datas, are holding mysteries expected to be discovered. This vocabulary of a strong and surprising aesthetic enhance the notion of a visual cue, and reveals the singularity of the “book” object: the facade effect is a stack of irregular sheets. These are actually slight wavy louvres window blades vibrating depending on times of the day, soaking sun shades of colors. 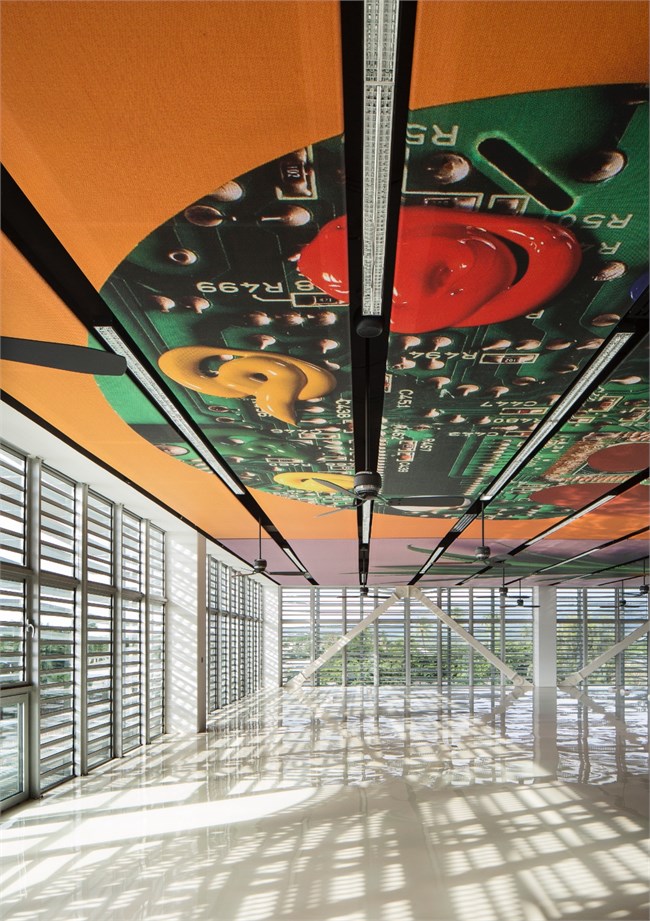 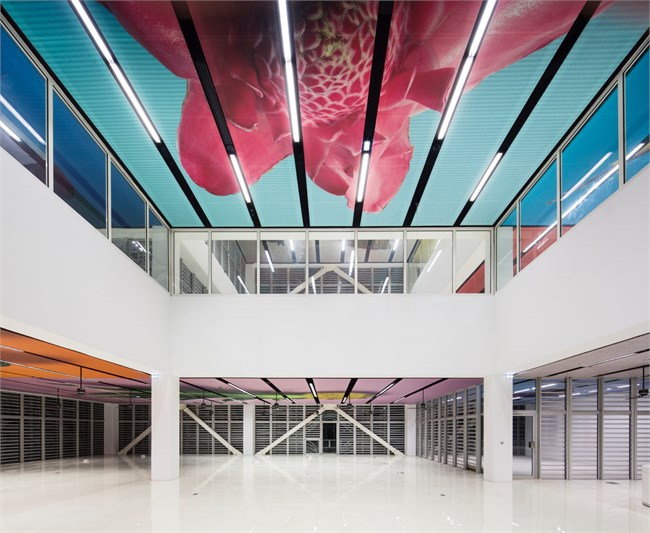 In this book some pages are opening like “eyes” to create chapters that structures the building: the lobby of the media center, the garden, and several terraces spread over the top levels molds some lookouts on the Indian Ocean landscape. As book illustrations, the ceilings of the levels gives to read pictures by Michal Batory about medias and Reunion’s heritage. Texts, pictures and sketches combine to generate a cultural atmosphere. 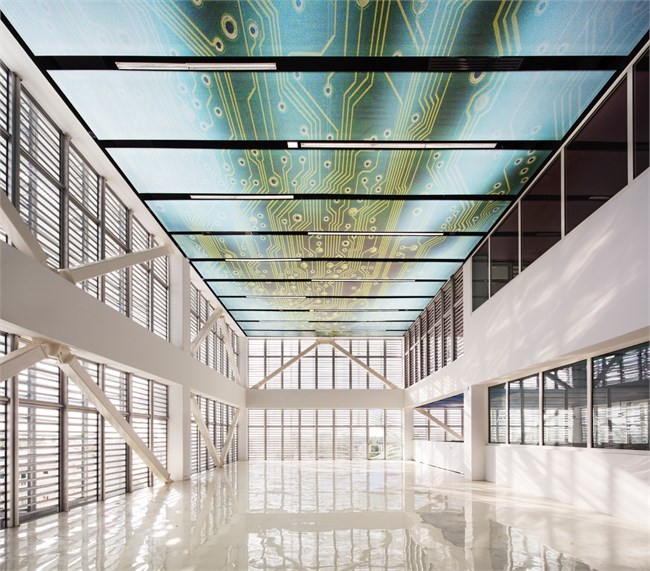 Interior spaces are warm, in a uniform white values the colorful pictures of the ceiling. The free levels opens over 270° to the landscape, bathing in light and crossed by a slight natural breeze coming from the louvres adjustable blades which optimize the thermal comfort of the users. The nature penetrates into the bulding, erasing the limits between inside and outside, to connect the build and the landscape. It generates amazing atmospheres between vegetal and mineral. The garden takes part of this organic ornament, surrounding the building and slipping into the interior spaces. The tall trees offers a smooth and protective shade : Pine trees, flamboyants, tamarins, will soon provide a qualitative canopy. On the ground, some planted islets are limited by benches. This public space invites to take a break and place the media center into a pleasant journey in the district.