The project is born out of chef Quique Dacosta’s will to open to clients the creativity studio of his 3 Michelin stars restaurant, allowing people to have a gastronomic experience in the studio itself. 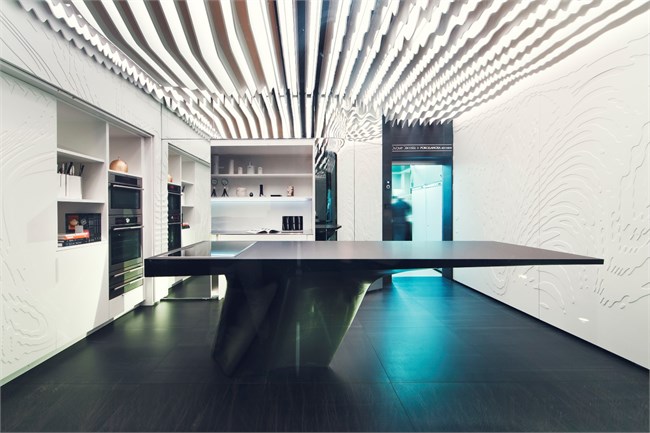 Because of Dacosta’s creativity and unconformity, what once started as a chef’s table ended up influencing the entire space. The influence was global, and all the knowledge, tools and techniques developed created new paths, new potential in two areas. 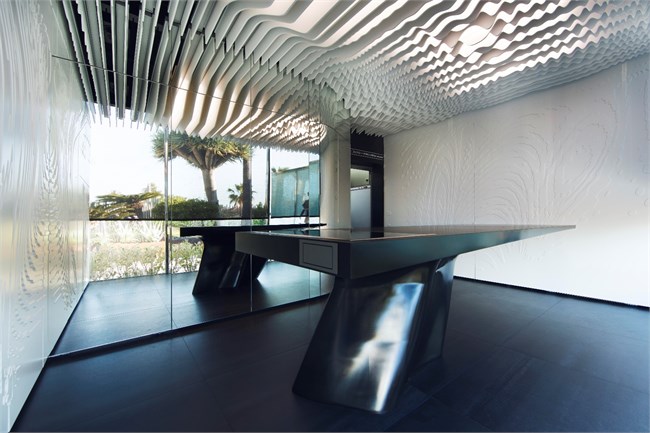 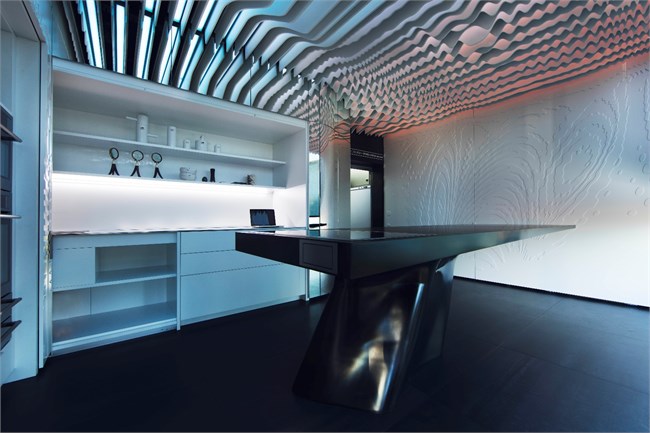 The project is a collaboration between Quique Dacosta food design lab and ggarchitects.

Quique Dacosta food design lab is a Dacosta initiative to create synergies with the food industry.

The spatial concept parts from a gastronomic concept, Dacosta’s landscapes, therefore the tectonics of the space are generated as a three-dimensional topologic cut with landscapes invading every constructive element: tables, ceilings and walls. 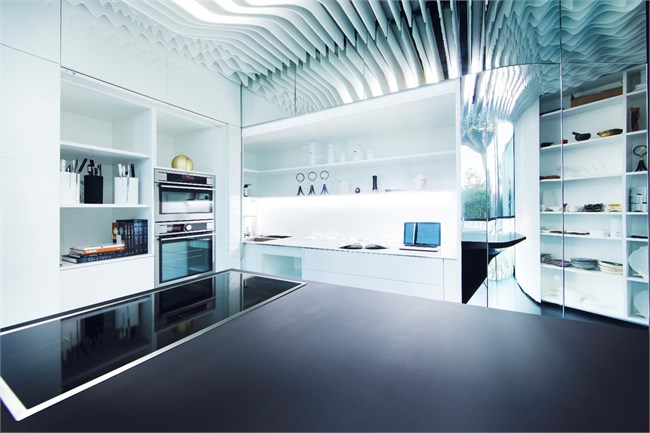 The strategy is to sublimate the purpose of objects, disappearing the boundaries between space, function and decoration. Additionally, as a result of the experience gained from collaborating with Porcelanosa, the home kitchen line is born. In this sense, the launch is double: Dacosta opens his creativity studio on the one hand and, secondly, releases into the market a kitchen line on the other, making possible for people to enjoy the same technology and technical solutions that Dacosta uses in his restaurant.

Three concepts have been worked on, which can be extrapolated to domestic kitchens:

1.   A central table as both sculptural and decorative element, a black Krion table in this case, where the restaurant’s culinary creativity is worked on, and also used as a dining table.

2.   Technical ceiling, a ceiling with white Krion sheets generates a landscape that holds a large amount of technology for space setting, such as the extractor hood, conditioning system, lighting and sound; the goal was to provide the space maximum versatility. In order to meet both creative and functional needs, both lighting and sound are integrated in the network and are domotically controlled. The near 2000 watts (total) of LED lighting are controlled by a dual system consisting of a DMX protocol touch panel that allows the creation and storage of multiple variations in the parameters control that shape the scenes. Likewise, unified control of lighting and sound (consisting of 4 hi-fi speakers) is possible through a tablet, allowing mobility within the space without relinquishing total control over technology.

3.   Cabinet doors-walls, the cabinets hold the rest of the equipment. A sliding and folding closures system has been used in this case so that, when closed, technology remains hidden and, when open, doors disappear.

Two strategies have been used in the doors-walls: the rear wall is mirrored in order to enlarge the space and the lateral walls are a topographic cross section that creates a continuous landscape with the ceiling. 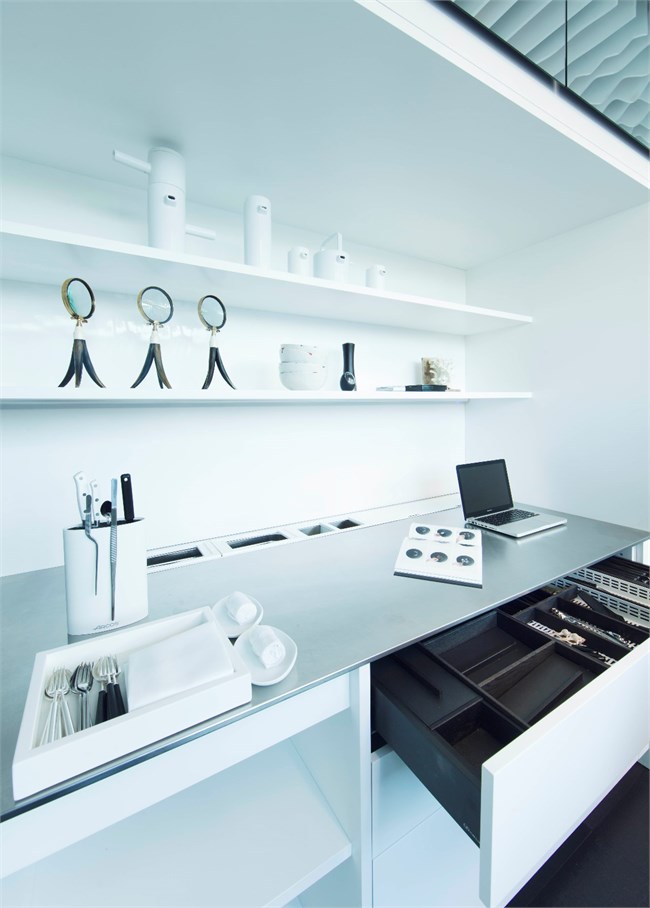 The traditional restaurant operates under a two-speed rhythm, two worlds: kitchen and lounge. This articulation may be very different, from complete separation to confinement, but there’s always a table and kitchen. Until now, perhaps, the chef’s table was the closest element to the kitchen, since eating usually took place within that space.

A further step has been taken in the creativity studio, since we’re no longer talking about a table within the kitchen but, instead, eating in this same place. The main area where meals are cooked and research takes place is also used for eating; in this sense, the guest is able to be  with Dacosta.

The chef becomes more approachable as he maintains direct contact with diners, whom while being in the kitchen come into contact with the very act of cooking. This fact certainly breaks new ground and amplifies the dining experience. 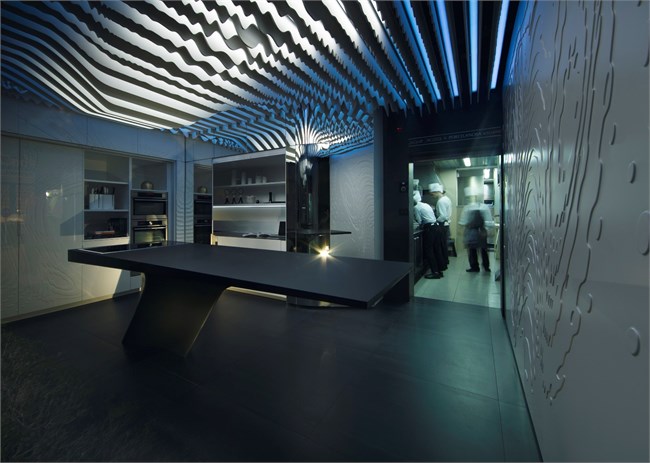 The creativity studio represents a new stage in the design-gastronomy relation. Thanks to Quique Dacosta food design lab, a double vector is established in which design not only affects and interacts with gastronomy, as has happened in the past, but the chef himself influences and creates through his food design lab, building a new relationship with the industry. 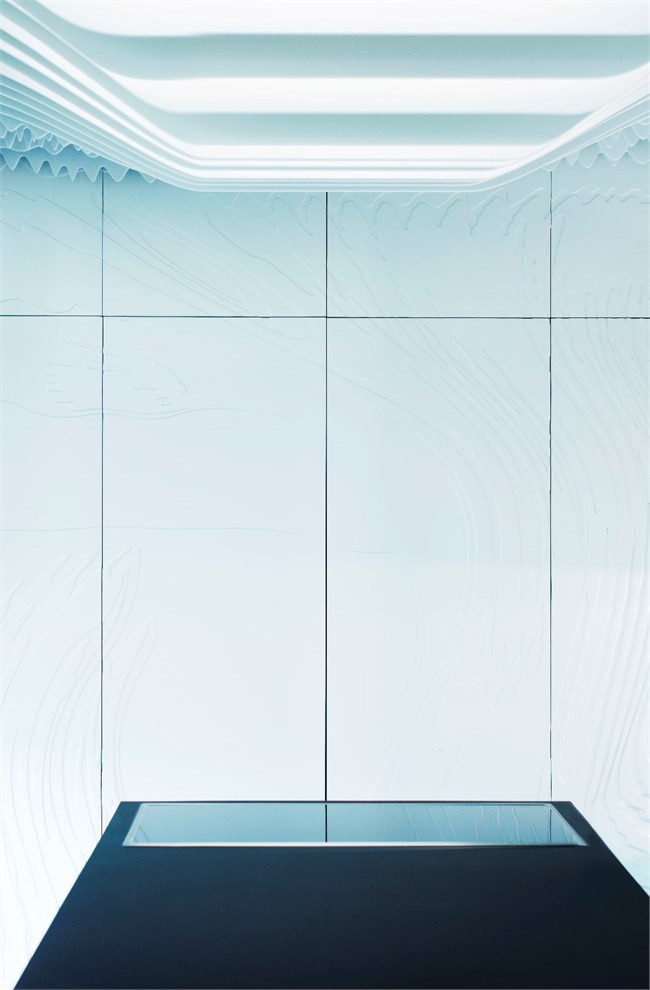 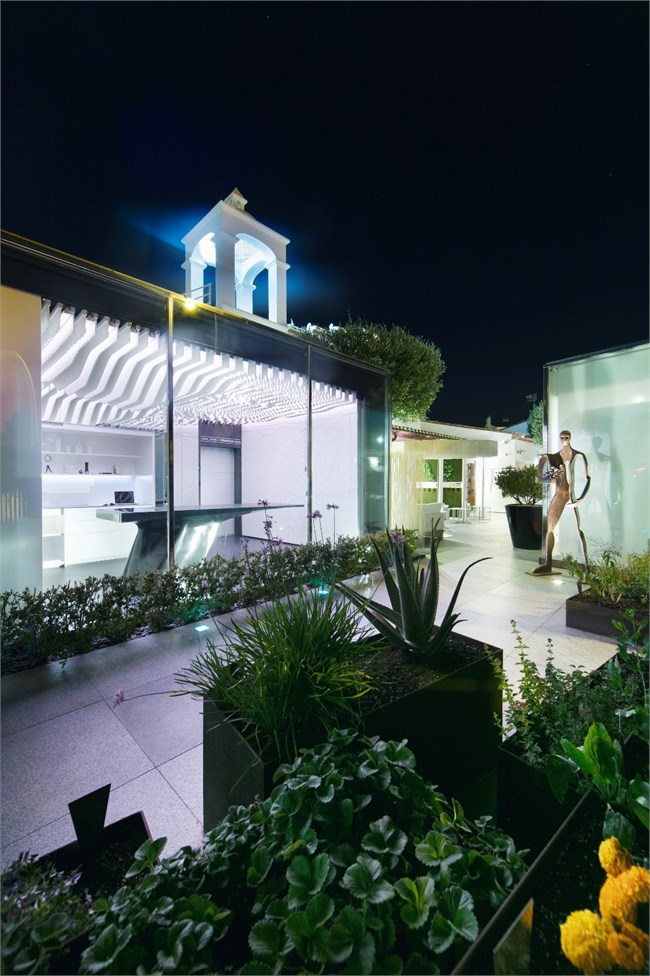