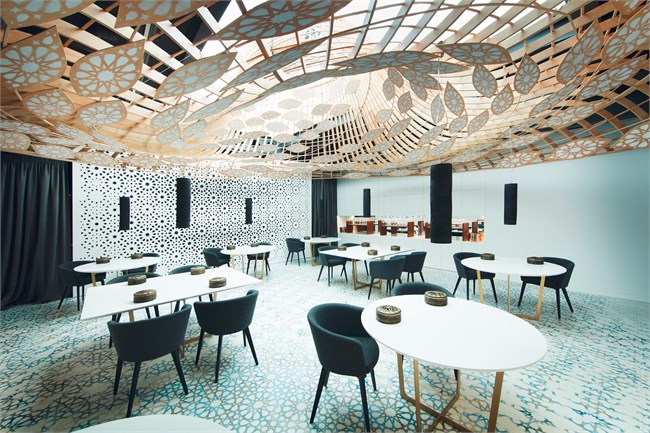 When Paco Morales embarked on the opening of his newest restaurant in Córdoba, he parted from a clear and ambitious premise: to regain and reinterpret Andalusian cooking from an avant-garde andhaute cuisine perspective. Therefore, the Cordoban chef didn’t conceive NOOR as a usual restaurant, but as a “cultural project” which would provide diners a complete gastronomic experience, that is, an actual recreation of what a palace banquet at the 10th century Medina Azahara might have been. Thisrequired going beyond a mere gastronomic proposal and involved all aspectssurrounding NOOR: from architecture to staff clothing, taking care and pampering every detail about decoration and tableware. 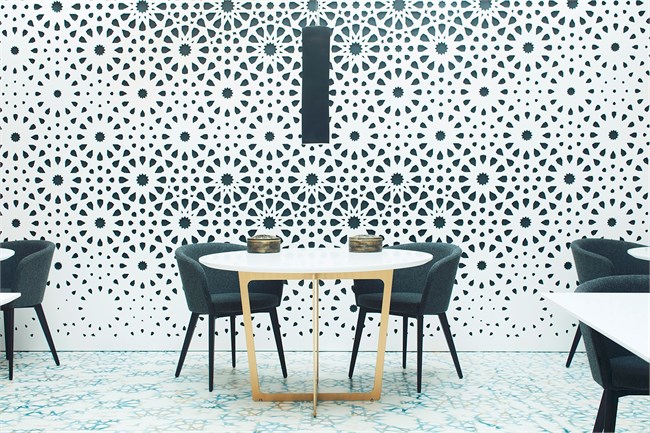 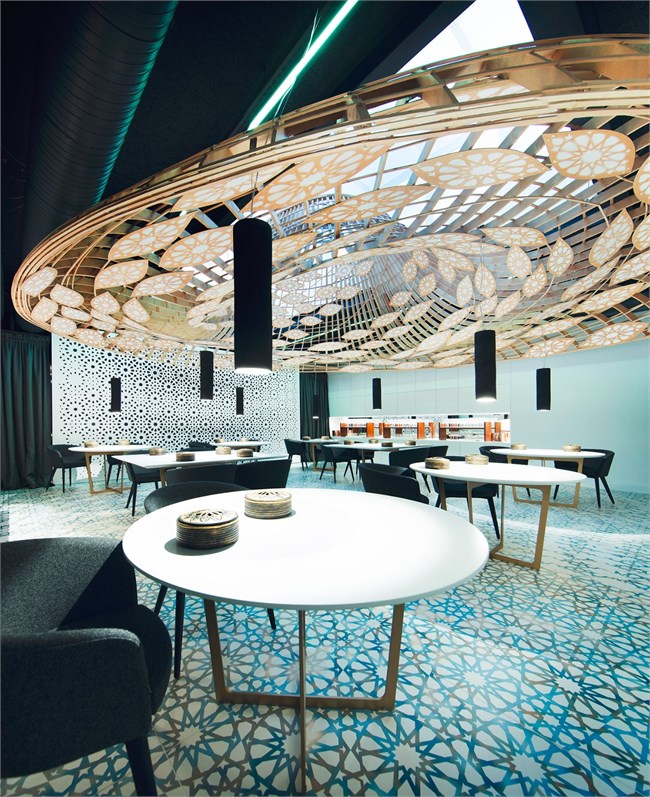 Following on from the above, the restaurant construction project had to revolve aroundthe Arabic heritage, but seen through a contemporary prism. To accomplish this, ggarchitects, the architecture firm in charge of the restaurant’s design, proposed the creation of “fictional archaeologies” and parted from the use of four of the most representative concepts of Islamic architecture: contrast between interior and exterior designs, sequence of spaces, articulation of light and shadow and the frequent use of geometric patterns. 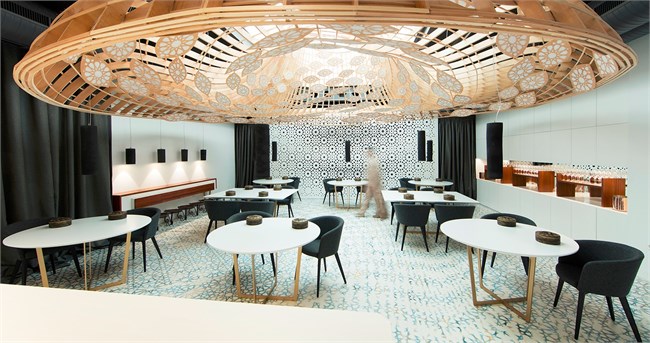 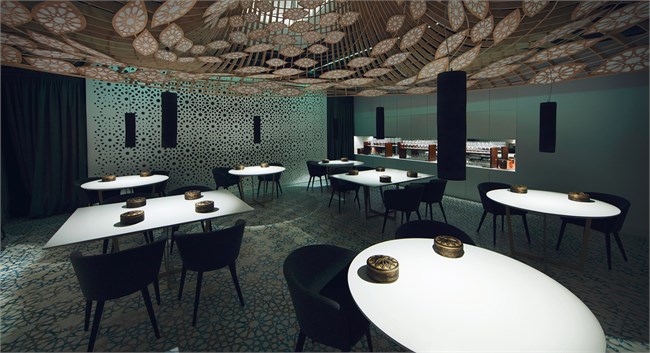 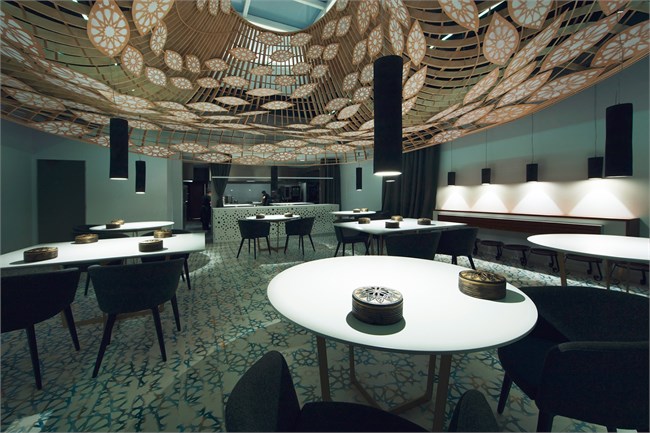 The contrast between interiorand exterior designs—present in numerous civilizations and architectonic styles, particularly in the Muslim culture,where the austere exteriors contrast with the richly decorated interiors— becomesevident in NOOR. Thus, the façade, deliberately sober, is covered by a ceramic skin with sharp geometric motifs engraved on it—arrows, in this case—, thatcreatesgradients which frame the entrance door and contrast against the soft and colorful geometries and patterns of the interior space. 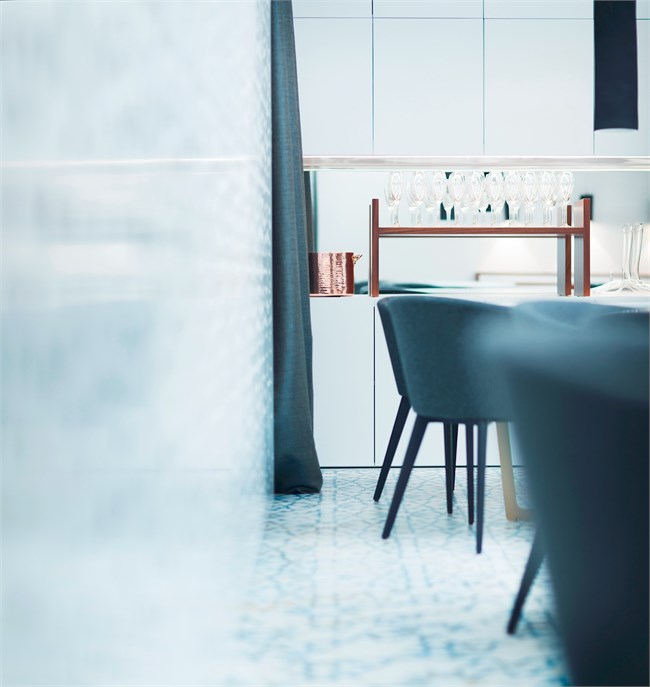 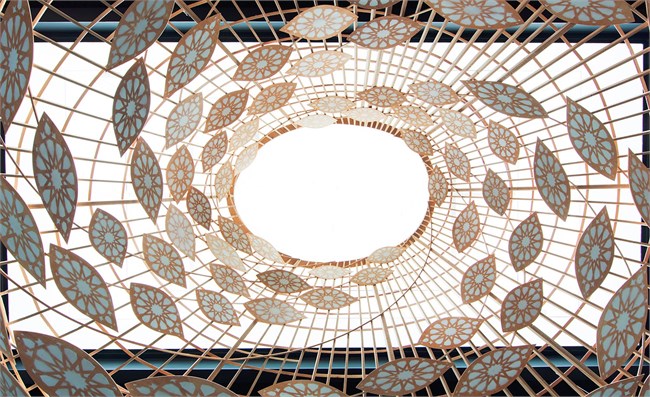 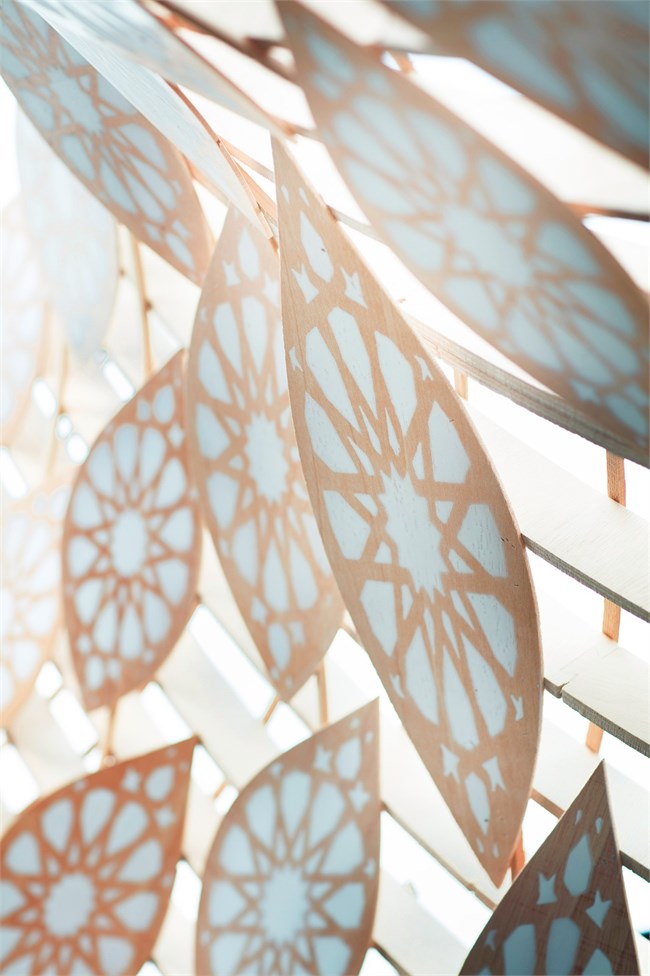 As might be expected (NOOR means light in Arabic), the articulation of light and shadow has a principal role in the project,as it is used both to accentuate the contrastbetweenthe façade and the interior, and to magnify the sequence of spaces. In this respect, the small lobby is of key importance, since the darkness of this space works as a filter amidst the exterior clarity and the lounge’s dense and nuanced zenithal light.This chiaroscuro effectis also presentin the confrontation between the brightness of the open kitchen and the dimness of the bath hall, creating a one of a kind atmosphere. 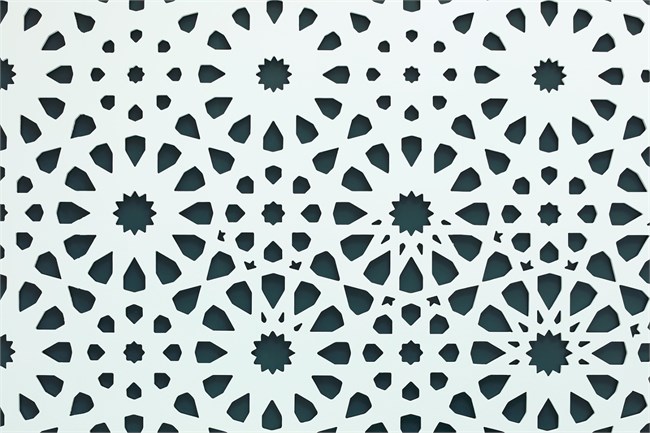 Meanwhile, patterns and geometry, both fundamental in Arabic art,functionas a vehicle for communication, adding layers of meaning, generating effects and invigorating the space.These designs, featured onfaçade, floors, lounge’s dome and interior walls, are embodied in different materials, all of which have been generated with parametric digital tools that allow thepatterns to be manipulated and varied into the environment, thus enhancing their aesthetic effect.Particularly notable are the geometric patterns onthe façade and dining floor, reproduced in Techlam® porcelain, by the Alicantin company Levantina. This revolutionary material allows the motifs to be digitally printed, hence itcan be customizedad hoc. Thanks to this feature, the creation of a workflow where ggarchitects proposed patterns and variations, Paco Morales offered feedback to allow continued improvement, and Levantina produced the unique and custom made pieces, has been possible.Furthermore, the large formatporcelainsheets, whichallow a fast installation and a minimum joint presence, and theirthin width, which allowthe tiles to be mounted over any existing surface, have made of this material the perfect medium to transfer computer images into reality. 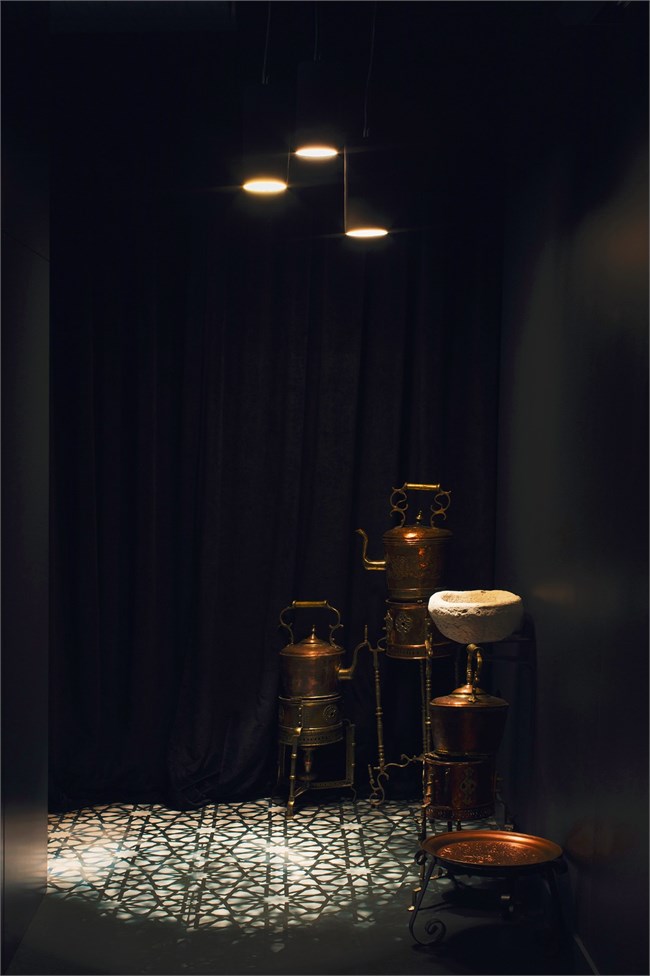 Regarding the restaurant’s interior design, the main lounge stands out, as it is a white and luminous space where a large wooden domewith medallions embellished by nazarí reminiscent patterns, the same as on the floor, presides over the room. This piece, created by artisan Manolo García, has a spiral shape that creates an ascending effect, framing and softening the zenithal light that comes in through the ceiling skylight.The other great presence in the lounge is the open-to-view kitchen, separated from the dining area by a pick-up counter lacquered in white, which creates an interior lattice that replicates the existing pattern throughout the room. 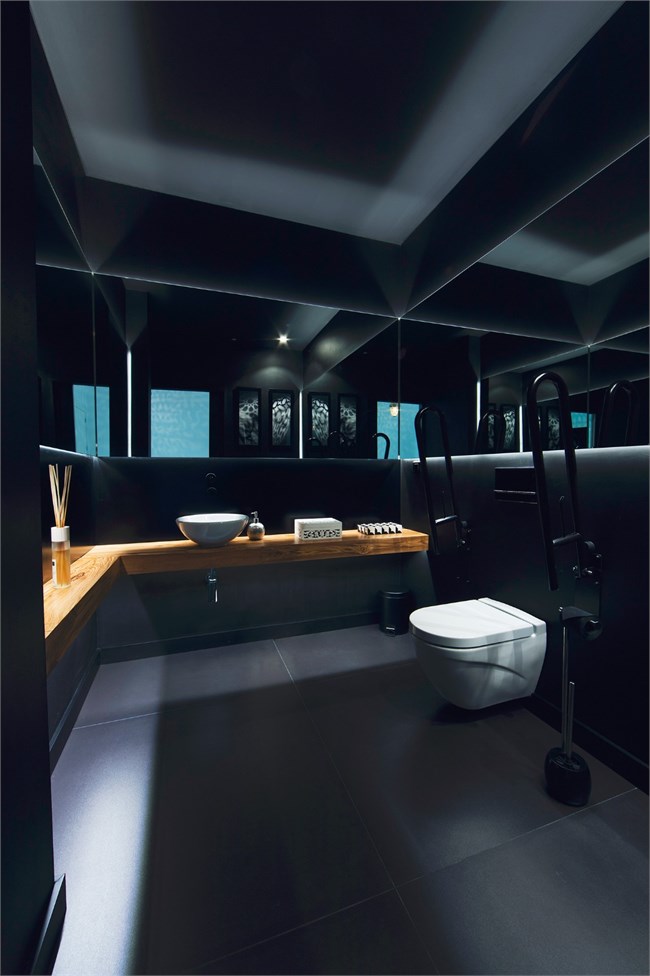 In addition, all furnishings have been personalized for NOOR, such as tables, with white top and golden legs; chairs, with customized legs and upholstered in gray ; as well as the large guéridon, to one side of the lounge. 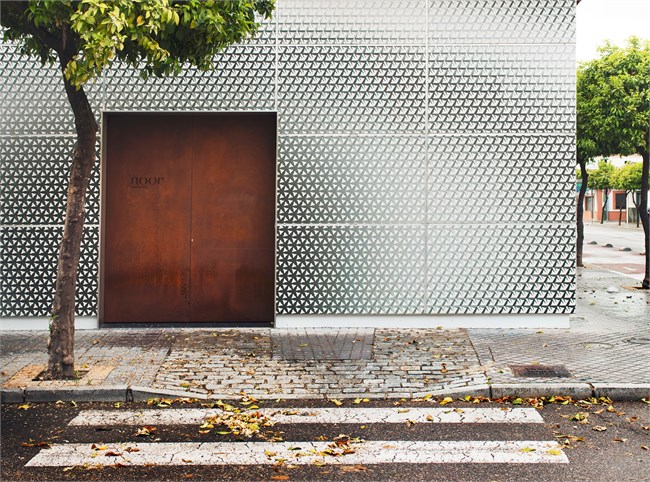 Finally, the tableware,cutlery and glassware,especially designed by artisans and goldsmiths with materials from the Arab period, such as leather, ceramic and wood, imprint each piece with Andalusian soul. Hand-turned ceramic lamps, cordovan leathertablecloths, coasters, pitchers, marquetry boxes, or the hand-blown drinking glasses, all objects in the restauranthave been designed to allow diners to have a complete gastronomic experience, which recreates thegreatest splendor period of Al-Andalus.