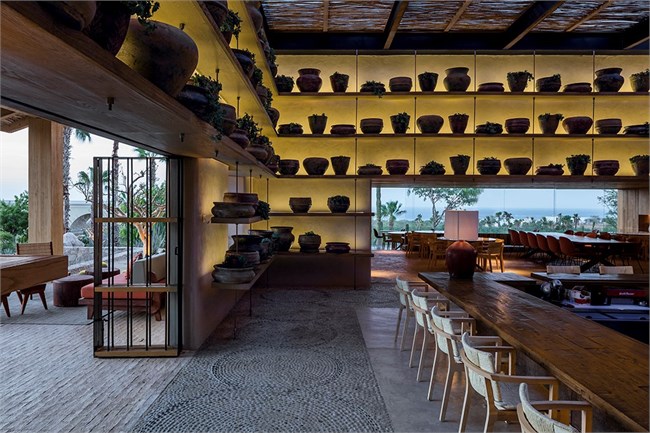 This complete renovation of an existing structure in a resort in Los Cabos, Mexico, aimed to bring the local atmosphere to the project. Located in front of a spectacular view towards the Pacific Ocean, the building was transformed in order to create a transition between a traditional Mexican courtyard and open views to the landscape. 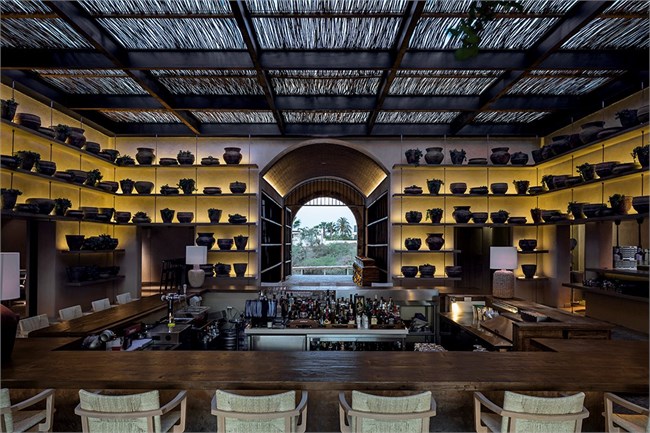 The desert climate, an arid flora and adobe constructions inspired a blend between regional vocabulary and cosmopolitan elements. The colors mimic the context’s earthly tones, and most materials employed come from local suppliers. 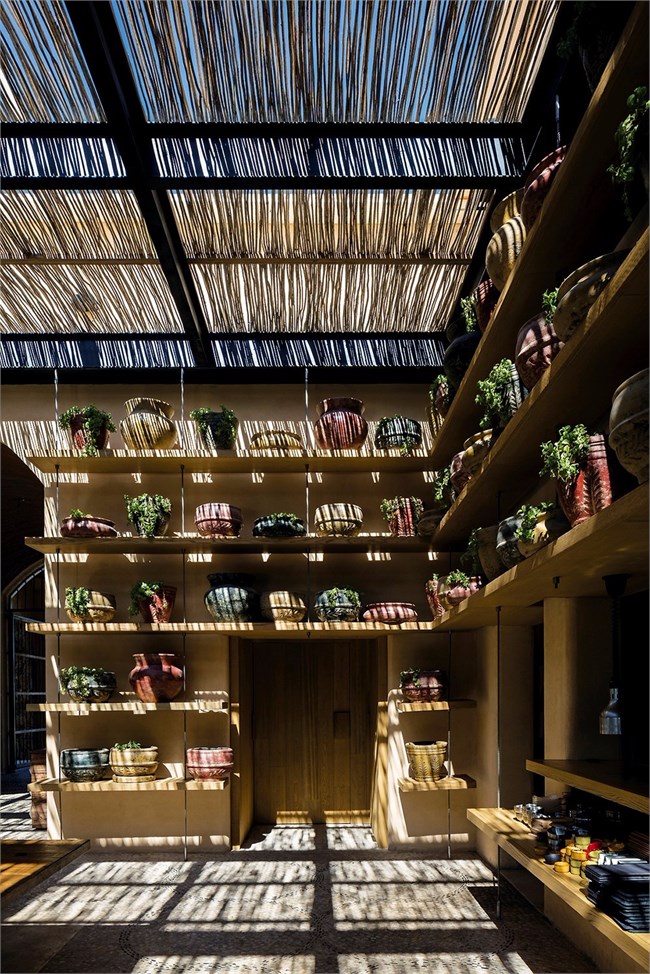 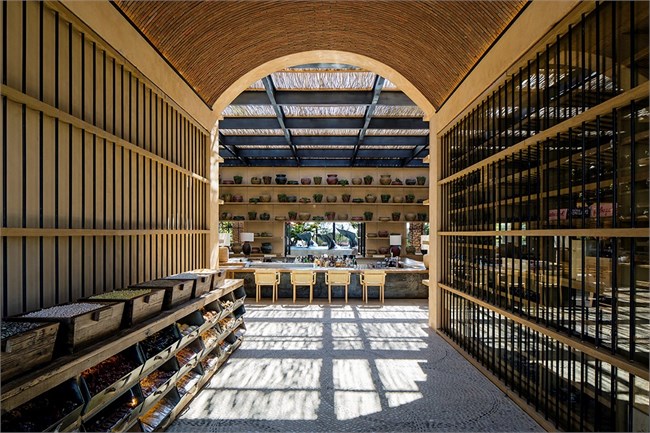 The entrance is made through a small corridor underneath a preexisting brick dome. Side walls are protected by steel cables, inspired by the wrought iron of colonial architecture.  On one side, a large rustic wood cabinet is filled with flower boxes, as in traditional markets, on the other, the bottles of the cellar work as a filter, allowing just a glimpse of the interior of the restaurant. 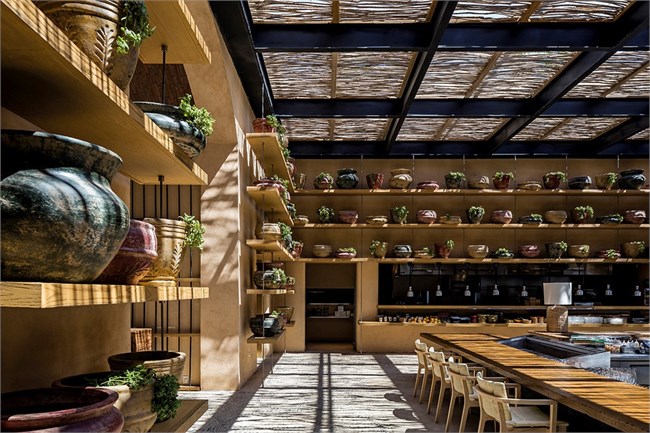 Stones make up an organic design in the flooring and lead to the bar in the central courtyard, protected by a retractable sun screen. Corten steel beams support the twig pergola that filters the abundant light present throughout the year in this seaside spot. Large shelves float suspended by steel cables, highlighting the horizontal lines of the courtyard. They support locally crafted ceramic vases filled with plants, a reference to the Mexican gardens that inspired Luís Barragan. The shelves are interrupted in rectangular sections that frame the neighboring rooms and extend the view towards the sea. Benches made with demolition wood were placed along the counter’s perimeter, enhancing the rustic atmosphere of the space. 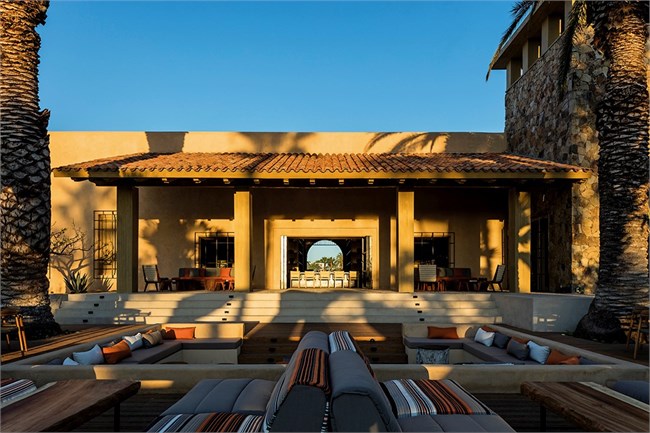 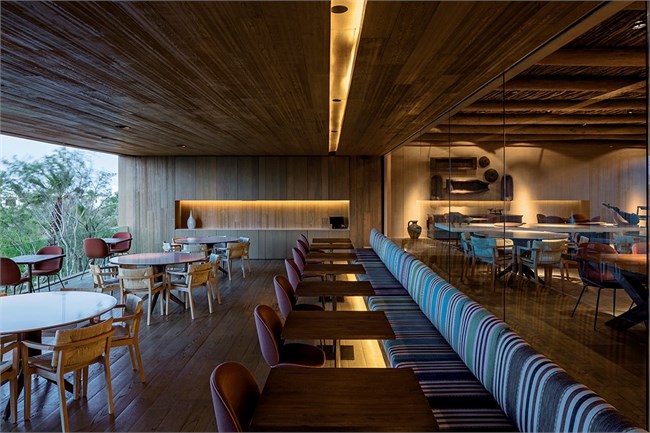 Next to the courtyard, the terrace and the restaurant room have tile flooring and wood ceilings. Tables were organized to host both couples and large groups of friends, which make up most of the clients in Los Cabos. 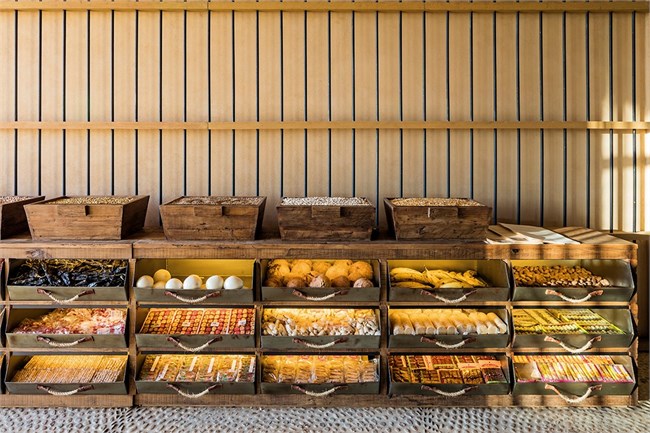 The interior design uses Mexican furniture icons, such as pieces designed by Clara Porset and Luís Barragan, along with Italian furniture covered with natural fabrics and fibers that make reference to local traditions in weaving and painting. Indian patterns bring complementary colors to the earth tones and rustic materials employed in the architecture. Rounded edged niches, as in adobe constructions, showcase local craftwork. 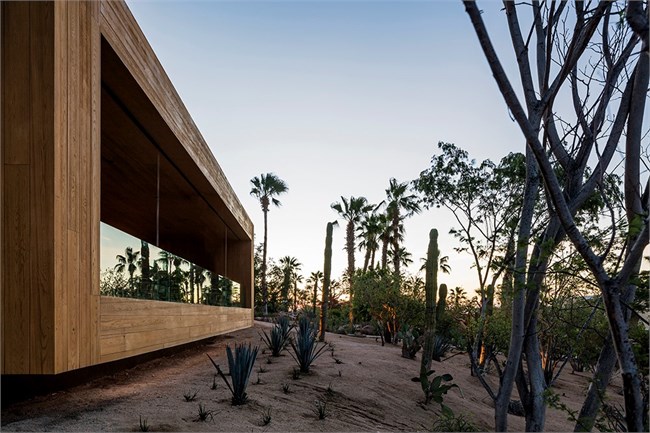 The largest addition to the pre-existing architecture is a cantilevered wooden box. It is in a level lower than the rest of the restaurant and opens towards the Pacific. Protected only by a railing, the space is dominated by a large bench of which the backrest is the floor of the upper level.  Outside, a wooden deck blends with the garden, hosting couches, tables and a ground hearth.

This restaurant in Punta Ballena is an exercise of balance between reinterpreting the Mexican references of the context and integrating an existing project with the landscape. It follows Studio Arthur Casas’ quest for blending inside and outside spaces; local and cosmopolitan influences. 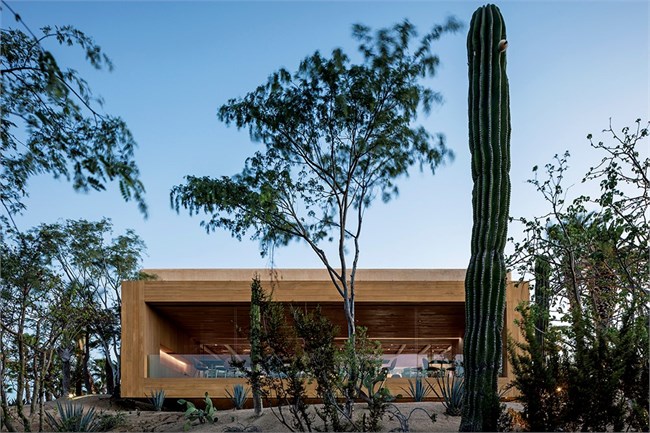