The apartment is located on the first floor of a building that was constructed in the second half of the 19th century on an area of landfill established along the Lisbon waterfront in the wake of the 1755 earthquake. 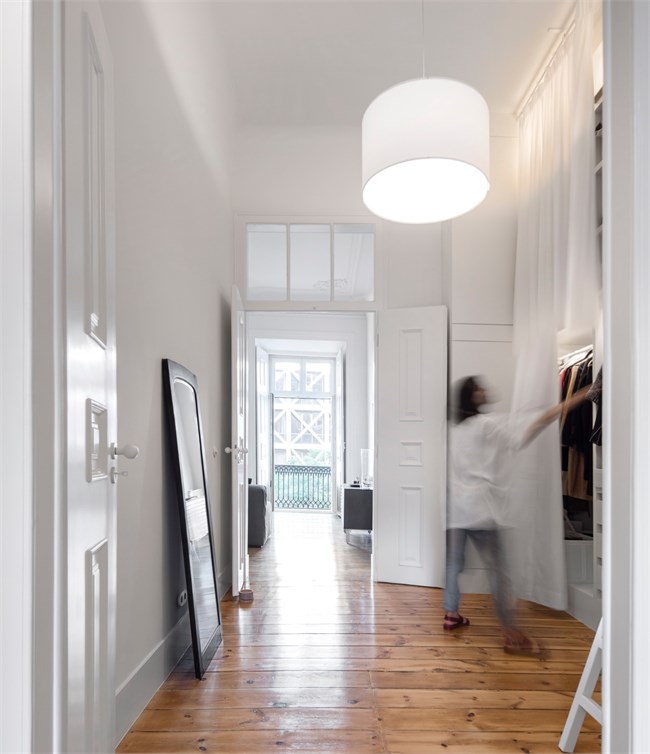 Its expansive area and lofty ceilings, the abundant natural light and the conservation of some of the original finishings and decorative features were not only among the characteristics that the client sought but are also those that best define this home’s identity. 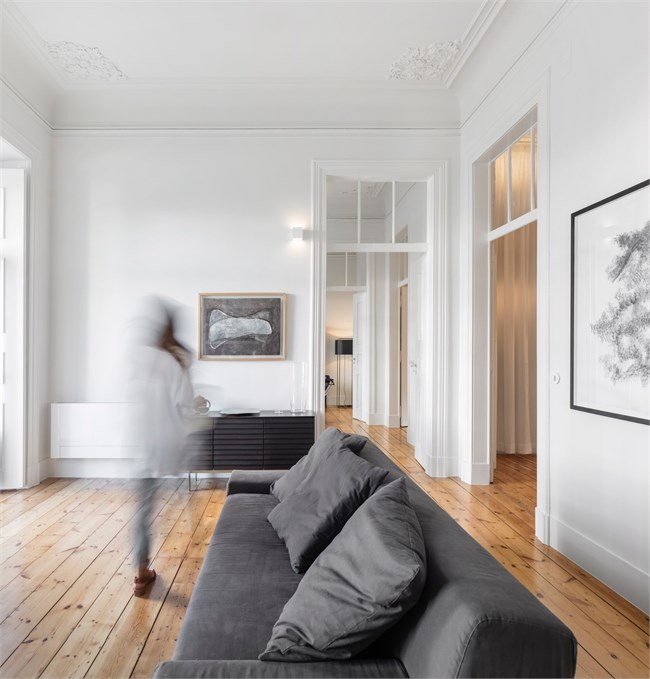 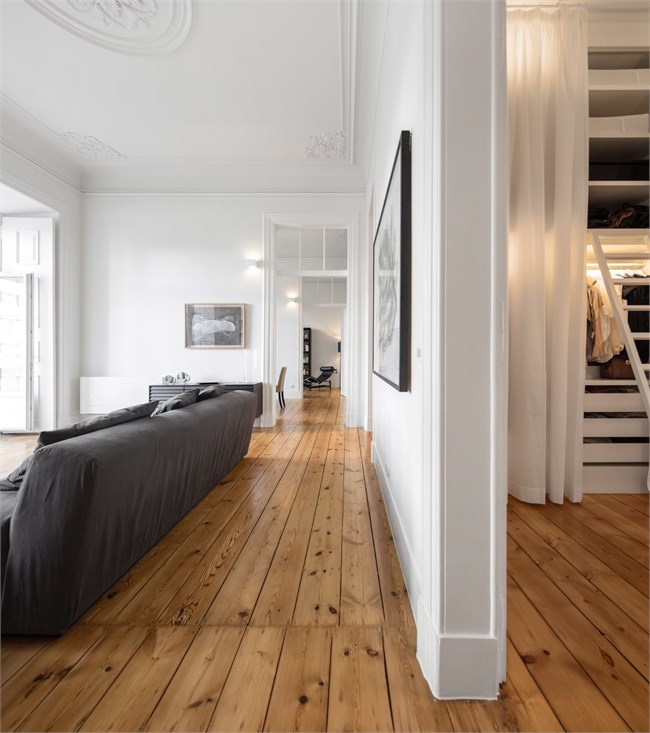 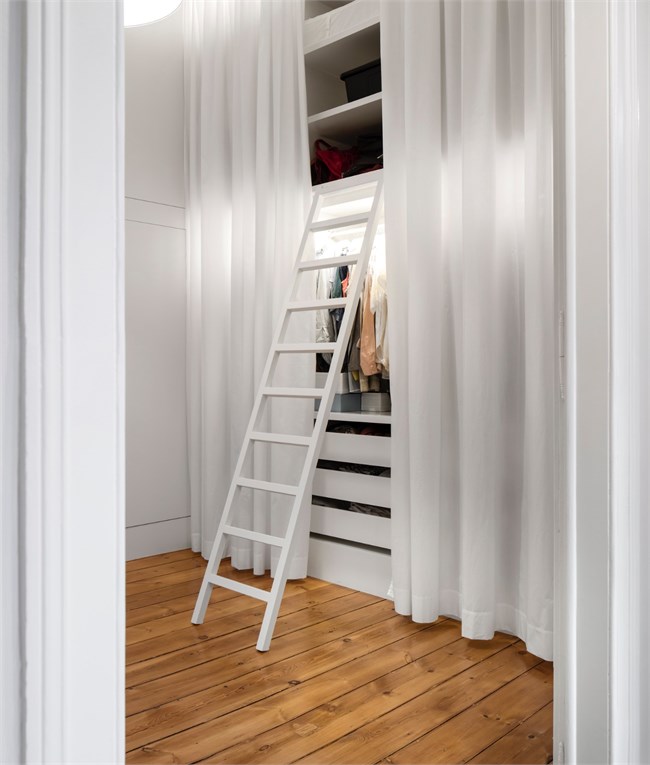 The project correspondingly incorporated the desire to restore, conserve and enhance these same characteristics in conjunction with a proposition contemplating an exercise in interpreting the Lisbon architecture of this period and its respective constituent facets. 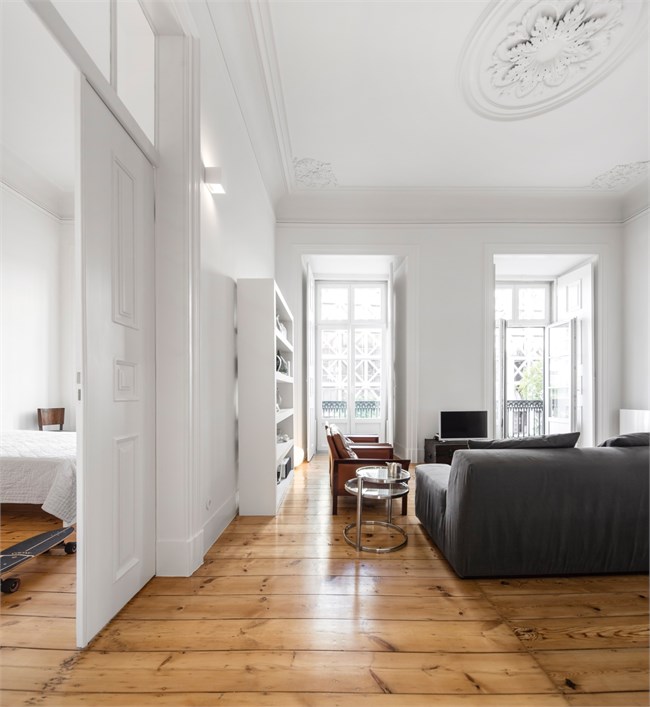 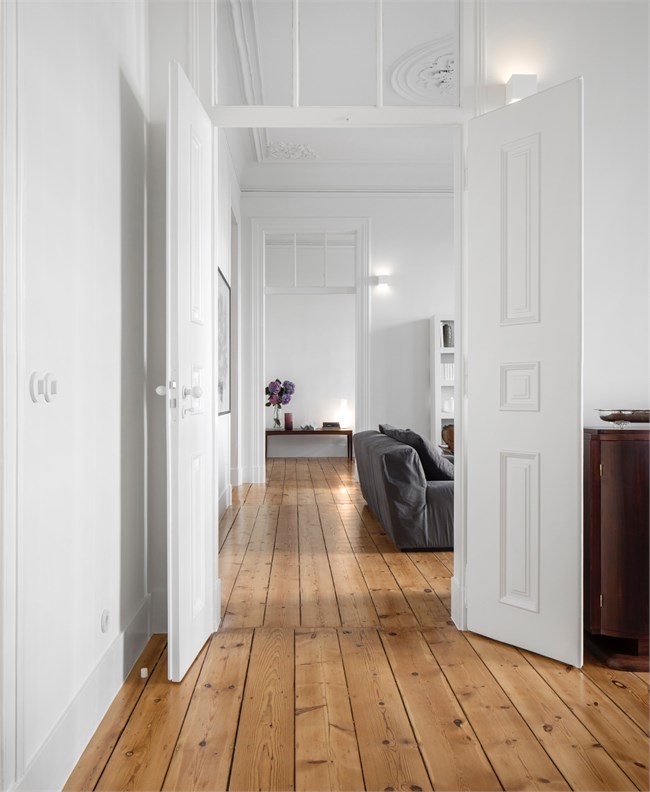 The spatial layout of the apartment broadly corresponded to the needs of the client and thus enabling both the safeguarding of its advantageous typological structure and the easy resolution of the programmatic impositions: the provision of substantial areas of storage space for clothing, distributed and incorporated into the three central rooms. These inner rooms and their respective contents were conceived and designed so as to be able to remain permanently open and interacting with the areas contained in the east and the west of the apartment and thereby endowing an intermittent and metamorphic visual and spatial relationship between these areas. 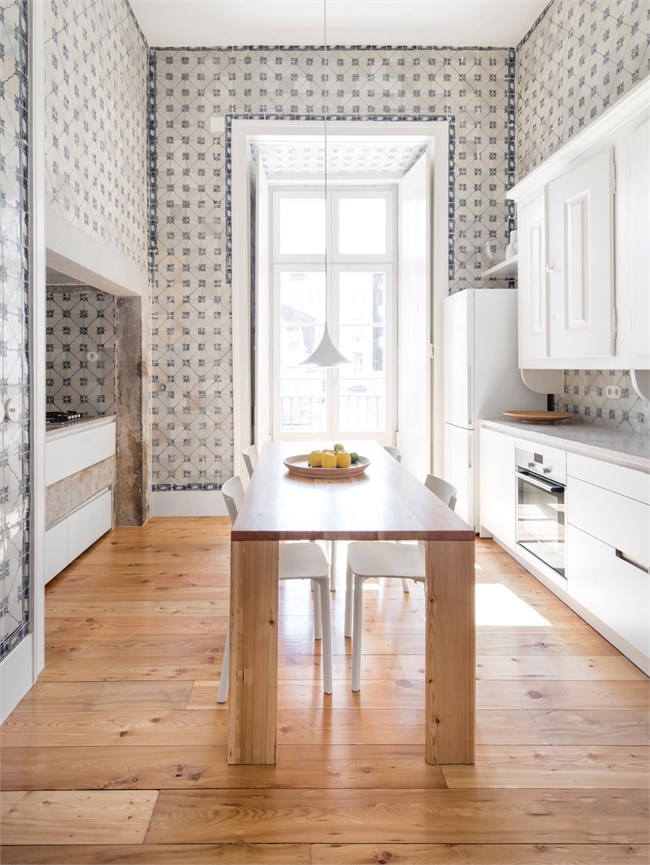 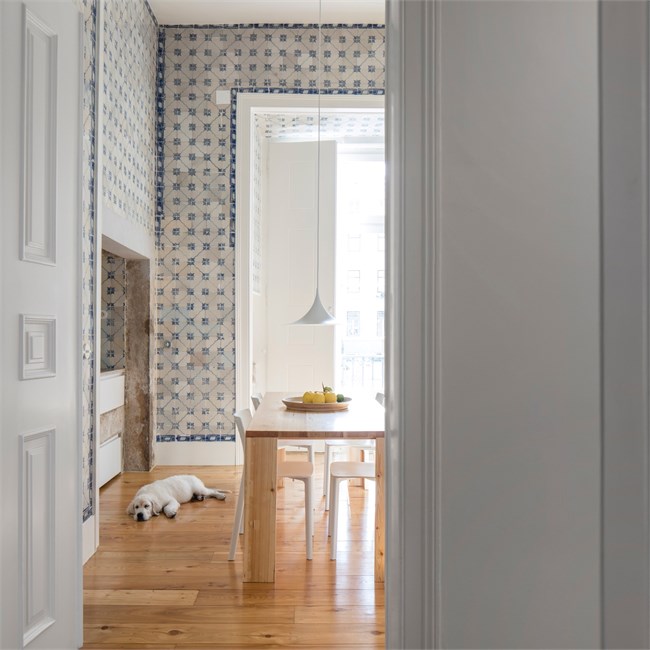 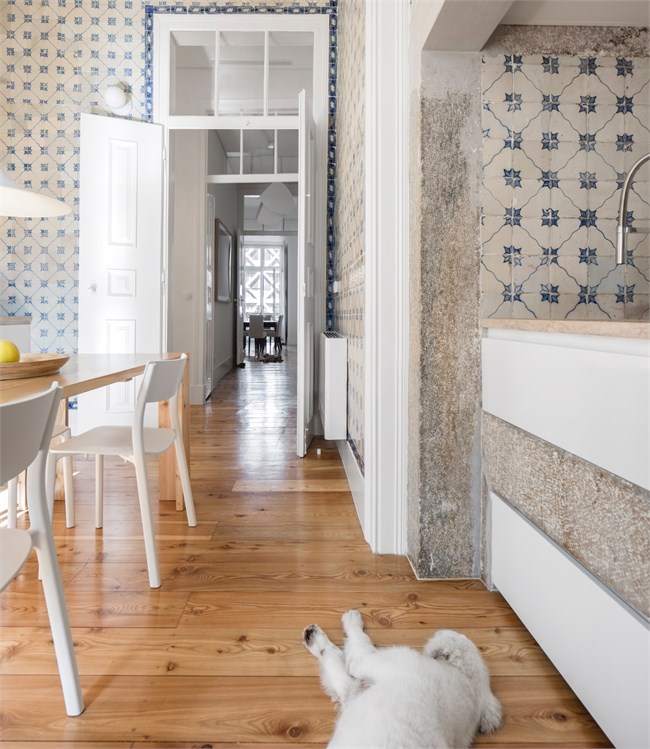 In the kitchen, where the walls still retained the original 19th century tiles, more recent interventions had introduced disqualifying features, especially the floor tiling and the finishings applied to the work surfaces, and these were correspondingly removed. In conjunction with the resolution of some pathologies – identified to a greater or lesser extent throughout all the apartment and in the main stemming from building work in the immediate vicinity and past water infiltrations –, in the kitchen, this scope extended to the introduction of a new floor, furniture, infrastructures and equipment whilst specifically acting to protect the tiles and the upper storage cabinet, which was preserved and restored. 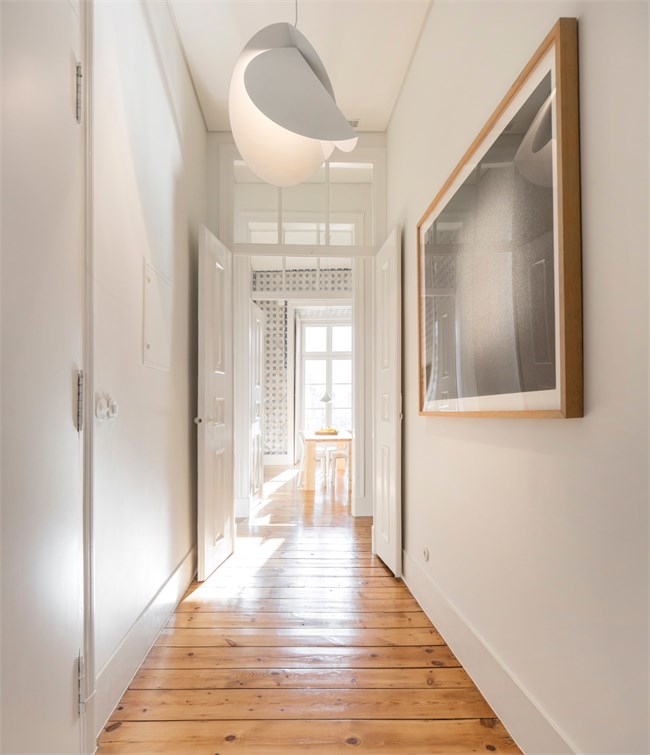 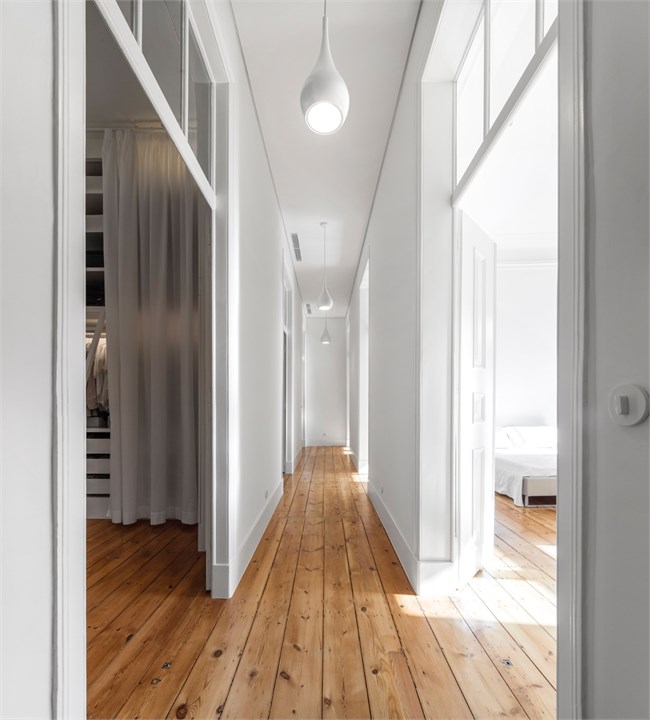 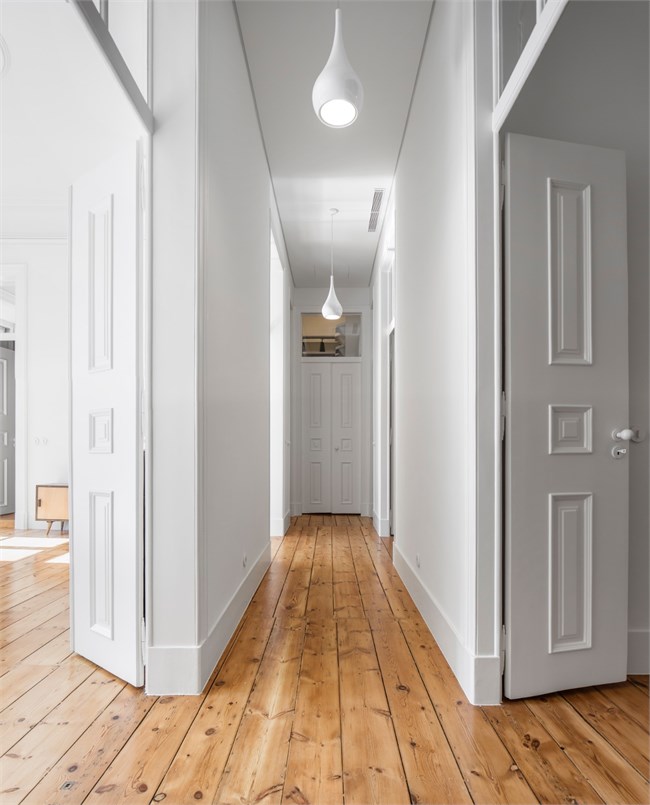 The bathrooms, with misaligned layouts and means of access, were subject to profound intervention. In the master bedroom, a new point of access to the bathroom adjoining on the western façade resulted in its own private bathroom in addition to another larger bathroom for the remainder of the house. Both were structurally redesigned with a particular emphasis on the built features and finished in Portuguese pink and tiger skin marbles. 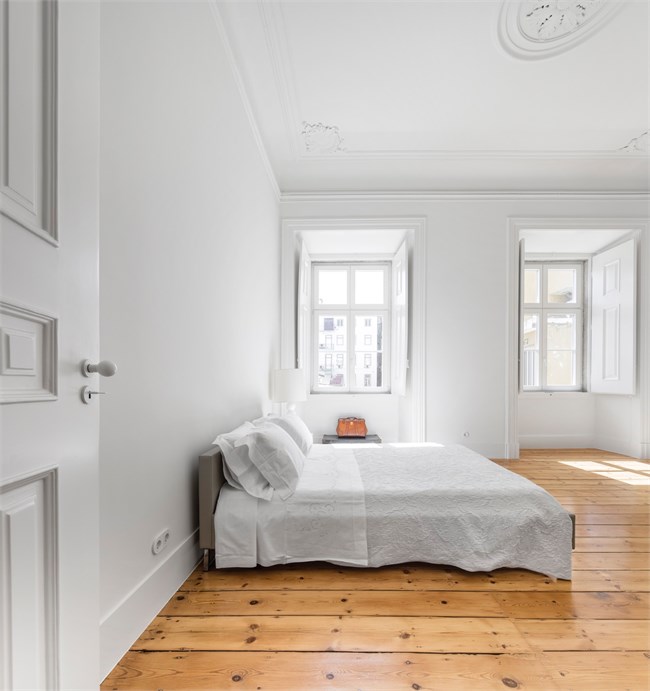 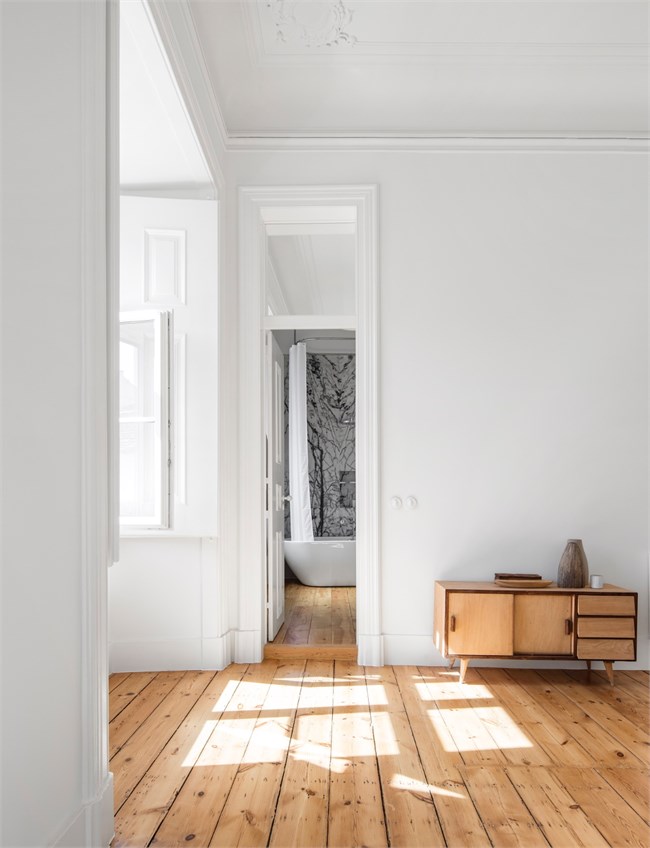 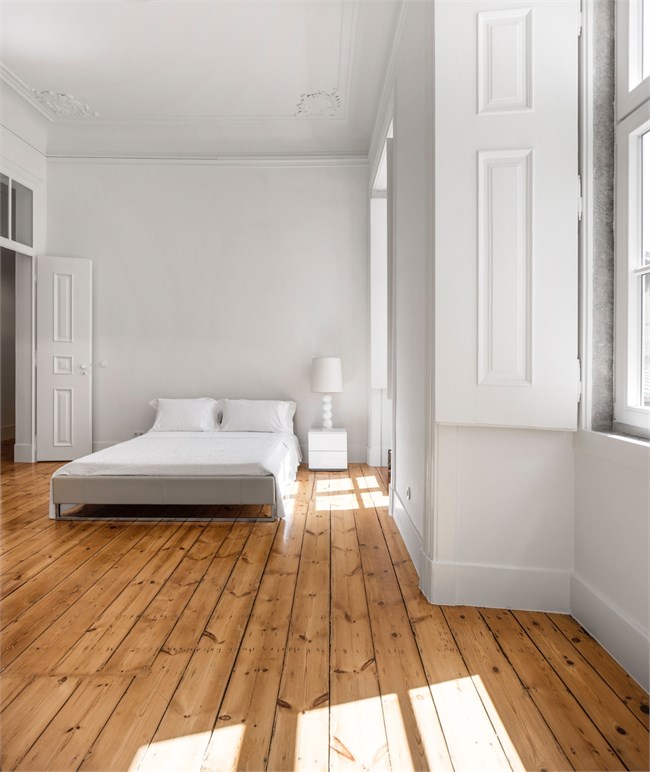 In addition to new systems and infrastructures – electricity, lighting, central heating and window frames – alongside those that were restored, such as the flooring and the plastered ceilings, a triage process was also undertaken. The various layers of time, the programs implemented and their consequent adaptations drove to a series of choices. The new solutions were integrated without jeopardising those selected for retention; the old, the askew, the already existing exceptions and those resulting from the work itself. 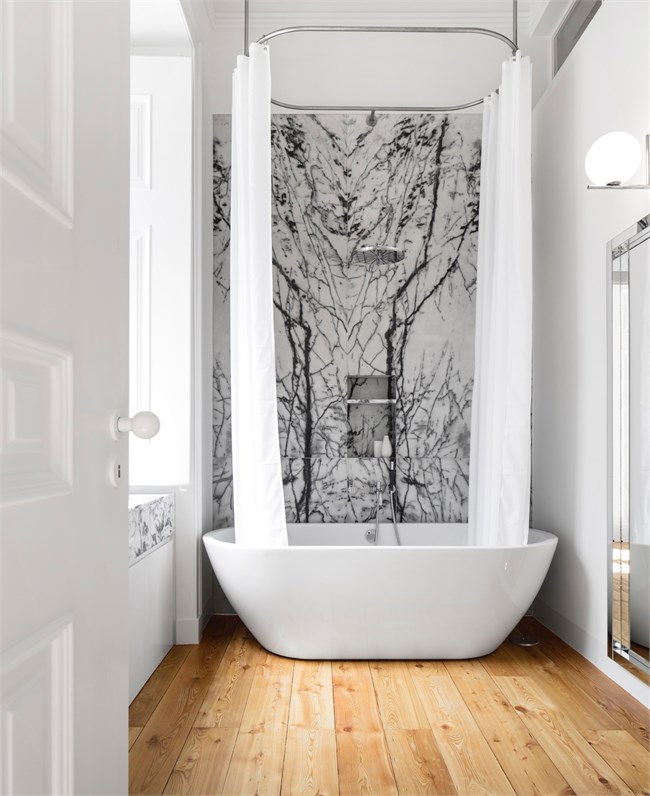