The young professional clients approached nimtim architects wanting to renovate and reconﬁgure their one bedroom garden ﬂat in Herne Hill, South London. They wanted to create an additional bedroom that could be rented temporarily to help pay off the cost of the project and might later be used by them as a guest/ spare/ baby/ living room depending on circumstances.

Nimtim architects proposed a bold and simple addition to the Victorian property. Identifying that the proposals needed to accommodate several alternative future scenarios, the key move was to propose a large ﬂexible space at the rear that could be equally used as the communal room as part of a ﬂat-share or as a space for a couple or small family. With this in mind, a large, simple, square space was created at the rear with a new side addition. The kitchen was moved along one wall allowing the rest of the space to be as ﬂexible as possible - able to accommodate living area, dining table, play area, study zone as required.

‘We chose a simple and playful colour palette to add a new modern layer to the traditional architecture of the property. The colour also distinguishes the new structure, architectural modiﬁcations and additions from the original layout’ said Nimi Attanayake.

Nimtim created a series of large, simple openings within the new elements to allow a visual connection from the rear bedroom through a small courtyard and the living space to the garden beyond. The rear space is also lit by large roof lights above increasing natural light into the north-facing rear elevation.

Materially, the palette was driven by a very tight budget but also a brief to be bold and playful. For the exterior the architects selected a split-faced concrete block with white-marble chippings - an extremely cost-effective material. The blocks highlight the new addition yet still reference the existing property’s masonry characteristics and the variety of texture in the original London Stock brickwork. The rear elevation is simple and conﬁdent with a large picture window in line with the rooﬂights above the side addition. The picture window and double doors are recessed into the blockwork - giving depth to the rear facade. Special cill blocks were cut to give a torn edge to the bottom of the windows on the rear elevation and internal courtyard. 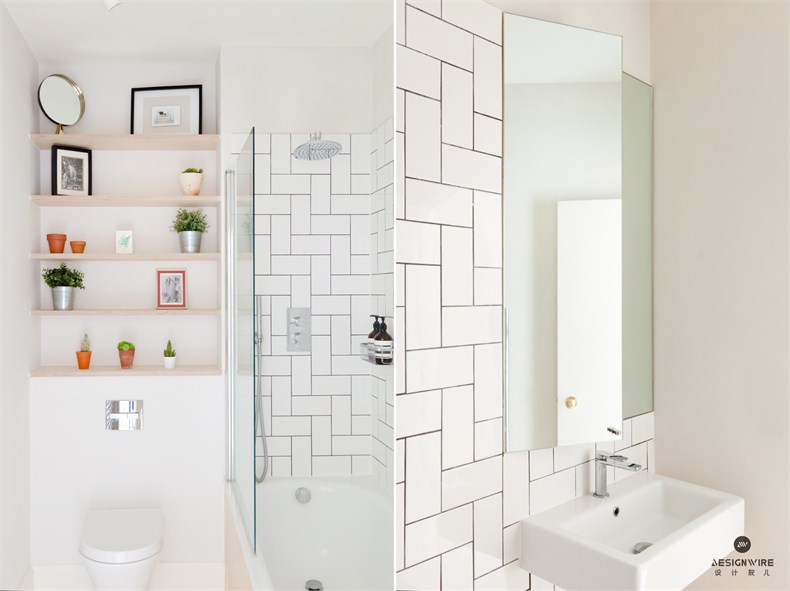 Internally, new and existing pine ﬂoorboards were painted white, bespoke cabinetry was made in treated birch plywood enlivened by brass ironmongery. The new kitchen splash back was designed and made by the client and their close friend, a ceramic designer. The kitchen splash back tiles were hand made, hand cut and numbered to the speciﬁc pattern in the ceramist’s back garden during the summer.